The First Smart Pot in the World 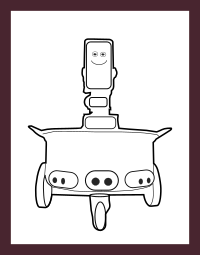 Our goal is to transform this small telepresence prototype into a robot capable of supporting human beings in the home, in education, in play and in entertainment in general.

What happened till now?

Thanks to his good high position on the Uncanny Valley, Poommarobot has an incredible appeal among children and adolescents!

I am a professor of Computer Science at High School and I am a freelance developer. In the last year (2018/2019), together with a colleague, we were called to consult in the development of an advanced data analysis system for Big Data, we used technologies such as Apache Spark and Cassandra. In my spare time I deal with Robotics and Artificial Intelligence, I am a musician (with the project Macrophylla) and a great Botany fan. In 2015 I invented the small domestic robot called Poommarobot, built with a kitchen pot and a smartphone as a brain. As you can read on this site, the initial goal was to build a telepresence robot that was reassuring in the interaction at home with children and elderlies. Among others, I have a special personal project that I called CyberGarden in which I am trying to put in my passion for botany and my experience with Robotics, AI, IoT and Big Data. The goal is to create a technology that is capable of transforming our domestic outdoor space into an ornamental garden and a vegetable garden at the same time. A place capable of supportin itself and supplies food thanks to robots, IoT and AI.

See it in action

For anything, do not hesitate to write to us.